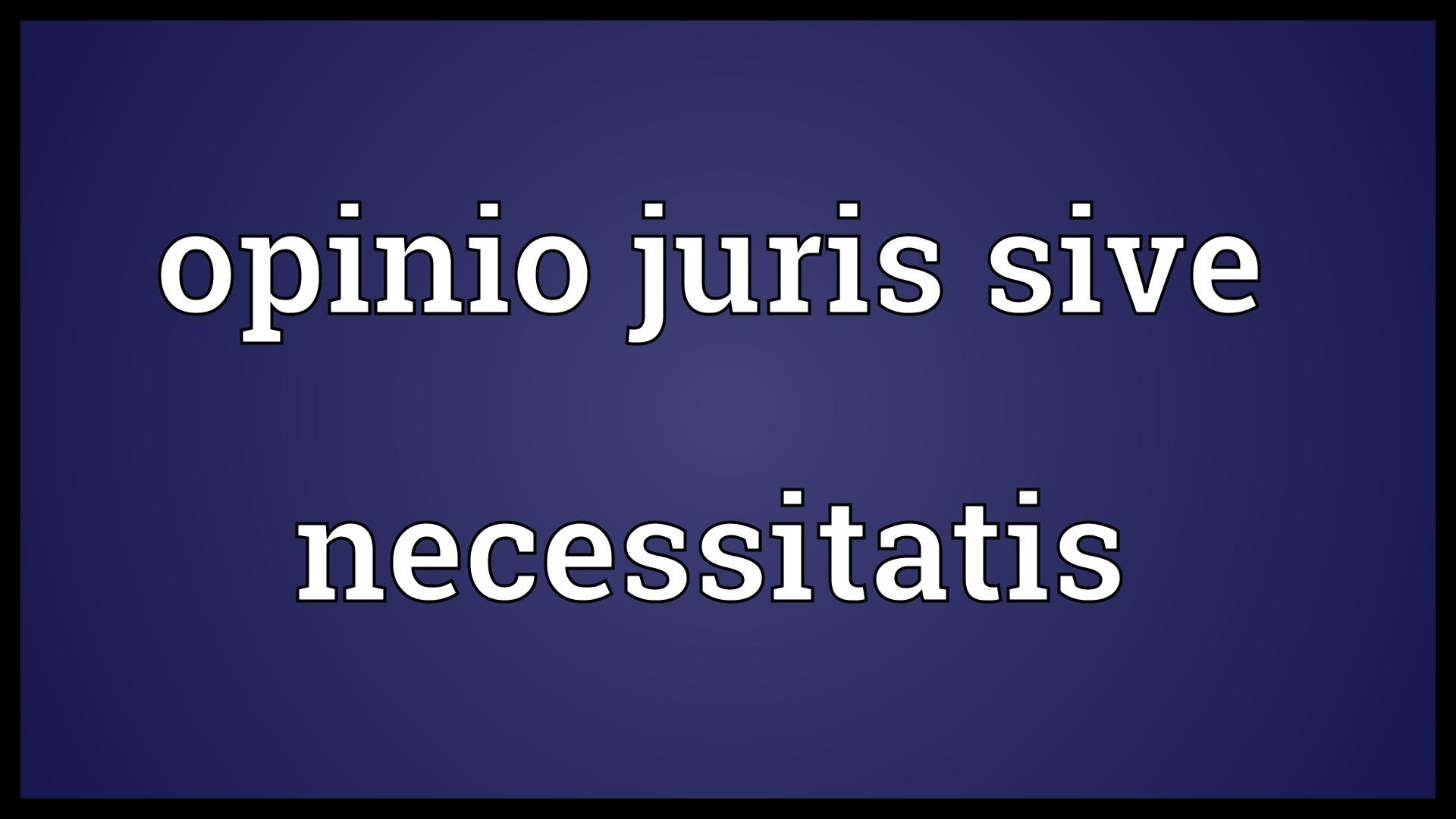 There is a Latin legal term which is expressed in the form of “opinio iuris sive necessitatis
(briefly; opinio iuris)” which’s meaning is “law or necessity of thought”. This concept emerges as
a formation of the custom (coutume) rules in today’s modern international public law system.
Firstly, it is necessary to examine the position of the term in the international legal system
because of the main activity as a formation of the custom has sub elements.
In this context, it is necessary to refer to sources of international law which are stated in the
statute of the International Court of Justice which is the principal jurisdiction of the United
Nations.
Resources to be consulted in review of the international law issues in this Statute are divided
into two which calls primary and auxiliary resources.
According to this, the primary/main sources are: international conventions, international
customary rules, general principles of well-known law in civilized states. On the other hand,
auxiliary resources are; court decisions and opinions in the doctrine.
This distinction is criticized from time to time, auxiliary resources are important at the point of
determining the content of the principal resources while attributed to binding of primary
resources in the context of discrimination. Regarding the our matter, we should refer to the
customary rules.
In terms of customary rules from theprimary/main resources in this statute, there is an
additional explanation as a “general practice accepted as law”. Starting from this explanation, we
can see that customary rules are accepted that it consists of two basic components a) monolithic
and ongoing state practice, b) “opinio iuris”; which means belief of monolithic and ongoing state
practice is mandatory in the field of international law.These components are called: “material
element” and “spiritual element”
In terms of practical value, “opinio iuris” is important not only by itself but also because of its
“sine qua non” (indispensable) feature at the point of the formation of customary rules along
with state practice. The judgments made by the International Court of Justice in various
jurisdictions are guiding both the understanding of the term “opinio iuris” and the emphasis on
the “sine qua non” feature.
The International Court of Justice used the following statements about the judgement of North
Sea Continental Shelf Cases:
“It is not enough for the state’s actions to coincide only with established practices. Besides
theseactions, it must be done in such a way that evidence of the belief that the execution of the
settled practices mentioned is imperative by a legal rule. The necessity of such a belief, that is
the existence of a subjective element, is hidden in the notion of opinio iuris sive necessitatis’s
essence. For this reason, the concerned states should feel that they are acting in accordance with
a legal obligation. The usual frequency of actions or the frequency of fulfillment is not enough in
itself. There are many international actions that, like in the protocol or ceremony, have an
almost unexceptional application area; But not in the sense of a legal obligation; it is fulfilled
with courtesy, convenience and traditional thought.
In the Court’s jurisprudence, the entry of States into a specific legal obligation within a particular
practice has been regarded as an element at the core of the “opinio iuris” and the “legal” nature

of the obligation has been foregrounded. The general belief is that while state practice is a
particular form of imperative for a legal obligation, There is an argument defended by
Lauterpacht that what drives the state to move in a certain way is only an “obligation”,
independent of the representation of “legal” .
Also, Judge Tanaka shows that there is just one way for identifying of opinio iuris is the existence
of a customary rule and the necessity of this rule in the international community in dissenting
opinion for North Sea Continental Shelf Cases, refused to seek evidence for subjective factors in
state practice
It is observed that this approach is based on the idea of necessity more than the “opinion of law
(opinio iuris)”.
Kelsen also states that the government has acted under the coercive influence of norms that are
not legal in practice, and if this norm implies a moral, rightness, or justice mentality, then it can
be a kind of norm that has normativity.
In this context, it can be said that Kelsen’s idea of opinio iuris is in a different place than the
function of distinguishing social practice from the legal practice that Gény uses when explaining
the opinio iuris.
We can see that the general content is in the opposite to the North Sea Continental Shelf Cases
and in International Court of Justice.
In the case of the Asylum Application,The Court argued that a country has an authority to give
the right of asylum to people who refuge in the embassy and the content of the claim that
embassy country has to respect isn’t qualified as a customary because of both the lack of an
ongoing practice and the fact that it does not take legal action to act in this direction, the politics
of governments to determine their asylum application.
In the Nicaragua Case, the same attitude was also found in the quotation above for the North Sea
Continental Shelf Cases.

Expression of “thought of Law” which is above the case-law and has better reflecting the
perception of today’s “opinio iuris”; glorifies the general will,putting the requirement of thought
to the foreground or using the requirement of thought without legal characterization, beyond
the formation of customary rules and approaches which are trying to explain of the nature of
opinio iuris, after G. Puchta’s expressing for the first time in the history’s ecology that the basis
of state practice should be “the legal conscience of society (justice thought)” and defining as the
belief that states have an obligation to base their practices on an existing “legal norm”.
Strongly emphasized by the Council that in the absence of customary rule can’t be embodied
and thus the customary law has the status of one of the two elements of “sine qua non”.